What does a music producer do, anyway ?

The term ‘music producer’ means different things to different people. Some are musicians, some are engineers, some are remixers. So what does a music producer actually do ? In very pragmatic terms, the producer is a ‘project manager’ for the recording, mixing and mastering process. She has an overall vision for the music, the sound and the goals of the project, and brings a unique perspective to inspire, assist and sometimes provoke the artists. The producer should make the record more than the sum of it’s parts – you could almost say she is trying to create musical alchemy. Every producer brings different skills and a different approach, and this can make what they do difficult to summarise. In this post I’ve identified seven distinct types of record producer to try and make this clearer. We book some of the top music and video producers in the game today check some of them out below! 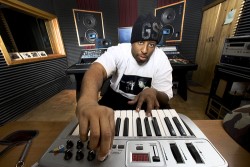 To book any of are talent fill out the contact form below and we will get back to you A.S.A.P

If it comes out of Detroit, then there’s probably a little DNA in it from producer extraordinaire, AK! That’s right people, AK is back with his alter ego TONE SCOTT {wearing those two hats as famed rapper/producer Kanye West does} wth the smash single,”WHOLE Click Ballin”! He has assembled an all star lineup of straight spitters! The producing prodigy himself, being first up to put flames on this joint {as it should be} is followed up by Payroll of DBC, Stretch Money of HLR and, last but never least, T-dot {Rock Bottom} of NFL! Now you’re probably thnking, this is crazy! But do you think the music conductor would stop there? Of course not! It’s only fitting that AK would lift the voice of the late, legendary, Blade Icewood to blaze the chorus and, a known fact is that AK has produced many hits for Blade {who still leads today in Detroit rap product sales, a testament to longevity}. Once again AK,{oops!!! I meant TONE SCOTT} the mastermind, has summoned his knack for bridging his street credibility, with his musical sensability,making this single “Whole Click Ballin” what the rap game will be calling for!

Has Over 25 years of Writing and Producing Music.
13 years of experience in Film, Digital Video, Color Correction and Digital Grading Processing .
20 years of Art and Graphic Design.
I put my soul in to my work in the hopes that it will fulfill its purpose.

Super Producer Carl B. has worked behind the scenes as a musician and producer with many notable people in the music industry Michael Jackson. J Dilla, Stevie Wonder, Slum Village, J Dubb, Pooh   Bear, Da’ Honeys  See first Hand what makes him hot!

From The Vault Un-Released Music